You are here: Home / Tutorials / Tutorials Phonetics / Phonetics: The Basics About Acoustic Features of Consonants in Standard English

When analyzing speech segments on a spectrograph, you will notice a significant difference in their respective sound patterns.  In this tutorial, we will note the more salient patterns of obstruents and sonorants.

Consonants are formed by the constriction of passive and active articulators in the vocal tract. The movement of articulators towards or away from each other creates differing degrees of pressure in airflow. The more constriction of airflow, the less sonorant the sound, and vice versa. Furthermore, obstruents can either be voiceless, (the vocal folds are spread), or voiced, (the vocal folds are vibrating). This, of course is specific to each language.  These features of any given consonant can be observed on a spectrogram. Let’s first look at voiceless obstruents: [-sonorant].

These sounds undergo 3 stages: closing, closure, and release. In voiceless stops, the first two stages do not show any change in air pressure since no air is flowing through the vocal tract. You can see in Fig. 1 that at the initial stage of articulation of /t/, there is no movement of air pressure. A voiced stop is distinguished from a voiceless one by a voicing bar that usually appears below 200 Hz. (Fig. 2) 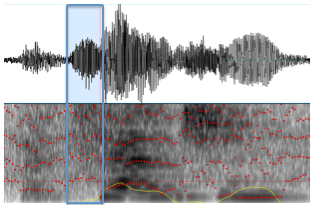 As the plosive releases into an adjacent vowel, a formant transition is created. The POA of each plosive causes a distinguishing pattern in these formants. The F1 rises into a following vowel for all POA’s. F2 and F3 is where the patterns change according to the POA. Bilabial sounds cause the formants to rise. For alveolar sounds, F2 remains fairly level while the F3 lowers. A velar sound displays F2 and F3 coming together in a ‘velar pinch’ moving towards the vowel, and separating from the ‘pinch’ as the velar is released. Figure 3 shows these characteristics for voiced plosives.

Fricatives are formed by forcing airflow through a narrow constriction between passive and active articulators, causing aperiodic vibrations (turbulence) at higher frequencies. These appear as irregular striations on a spectrogram, thus the POA does not affect F2 and F3 as in the articulation of plosives. However, the POA will affect the strength/weakness of the peak of energy used in production.   In other words, in the articulation of anterior phonemes, the constriction of airflow occurs towards the front of the vocal tract resulting in a shorter filter, resulting in a weaker output of energy than with fricatives produced towards the back of the vocal tract, in which case, the filter is longer, allowing time for air pressure to build.  Thus, anterior fricatives show less spectral energy (lighter), whereas posterior fricatives show a higher level of spectral energy (darker). Fricatives produced toward the front of the vocal tract yield a flatter frequency than those produced further back. We also encounter a distinction between voiceless and voiced fricatives, similar to that of plosives in that for the latter, a voicing bar is visible.

Affricates – As can be expected, spectrograms of affricates show a stop closure followed by the striations characteristic of a fricative. Figure 6 shows the spectrogram of English [tʃa]. 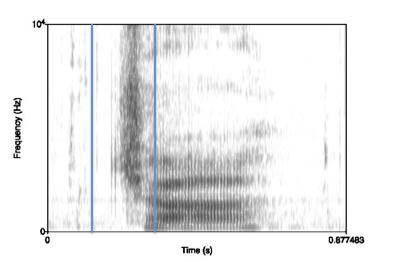 The spectral patterns of [+son] consonants show the production of resonance in the vocal tract. Certain sonorants show vowel-like characteristics, however they are articulated with more constriction than vowels and display quicker transitions.

In the articulation of nasals, resonance occurs as the airflow is forced from the oral cavity into the nasal cavity. They show a lower frequency of energy and a distinct ‘murmur’ as they transition to a vowel as seen in Fig. 7. (left) The POA of a nasal is seen in the shape of the F2. Fig. 7 (right) shows the rising of F2, characteristic of bilabials. Nasals have an additional formant (F3) around 2500 Hz.

Approximants are the consonants that are most similar to vowels. In fact, certain approximants behave like vowels in specific phonological environments, e.g., glides in diphthongs. Approximants display a lower F1 than vowels, and are characterized by gradual formant transitions. They are produced with very minimal obstruction of airflow, which results in the absence of turbulence and the presence of continual voicing (this, of course, is dependent upon co-articulation with adjacent phonemes).

Rhotic Approximant – Figure 8 shows the spectrogram of rag /ɹæg/. Note that F3 is under 2000 Hz.

Your Subscription Info | Your Purchase History | Your Receipt